For DUOS POUR CORPS ET INSTRUMENTS, I composed the music, designed the amplification system and developed a simple sound generator. 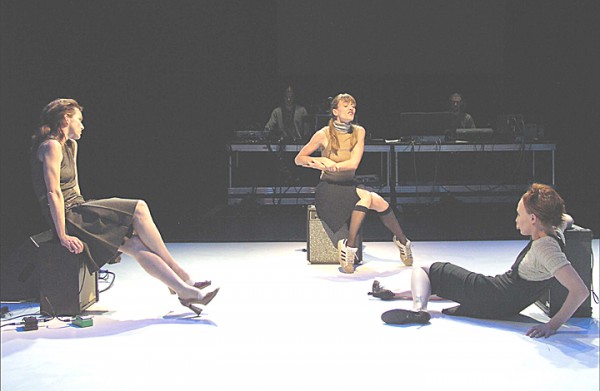 In this choreography, three dancers participate in the creation of the soundscapes. Playing a singular instrument based on feedback, made of a guitar amp and microphones positioned on different parts of their body (I will further explain below), the dancers-musicians improvise in solo or in duo, over pre-recorded material, during the entire piece. 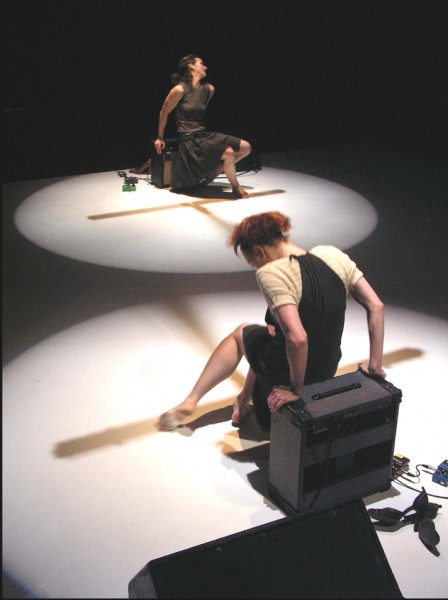 The sound creation was mostly guided by the guitar and the free spirit attitude of 1960-70 rock’n roll. Choreographer Danièle Desnoyers had told me that she was interested in the aesthetics of rockn’roll as a departure point for inspiration. She was very much inspired by Patti Smith, her freedom, her integrity, her delinquent attitude. Still trying to define the formal aspects of her new choreography, Danièle said that she kept seeing Siôned, one of the dancers, playing a guitar solo in a “Patti Smith” style. We both agreed that the electric guitar was interesting and inspiring not only from a musical point of view, but more so as an object, a symbol of a time, an attitude. 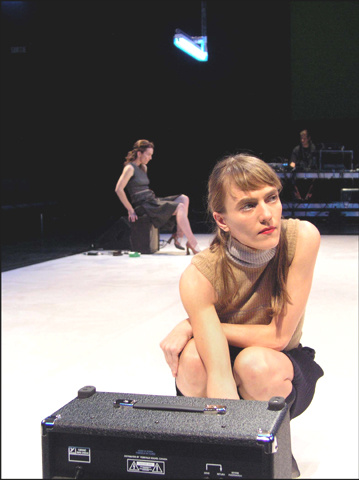 I suggested to Danièle that I would try to create soundscapes using only excerpts from guitar solos of the 70s’ and early 80s’. I was also interested in the guitar amplifier as a source of sounds: hiss and hum became elements of my compositions. I recorded several different amplifiers, archiving their different noise textures. This material, as well as  several guitar solos, are at the root of the recorded soundscapes for DUOS POUR CORPS ET INSTRUMENTS.

As mentioned earlier, the dancers were also implicated in the creation of the soundscapes. 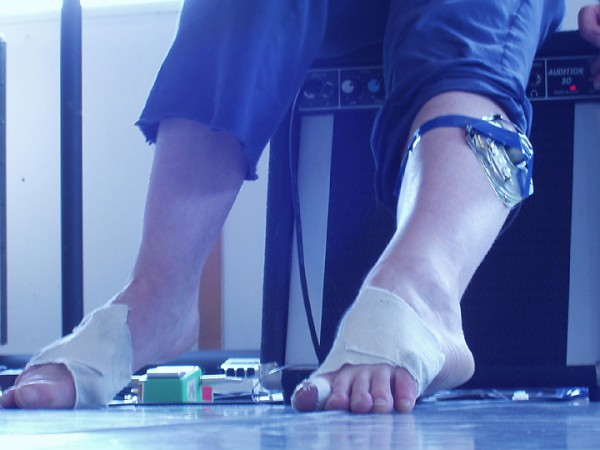 To continue with the idea of the electric guitar, I developed an instrument based on feedback for the dancers. Inspired by the guitar solos of the 70s’, such as Jimi Hendrix’s, feedback was a very important part of a solo, guitarists closing in on their amps, using distortion and overdrive pedals guaranteed for maximum feedback performance. These were the typical guitarist tools of the 70’s.

For the dancers, I wouldn’t say I invented an instrument, but I used existing technology in a different manner to create feedback. 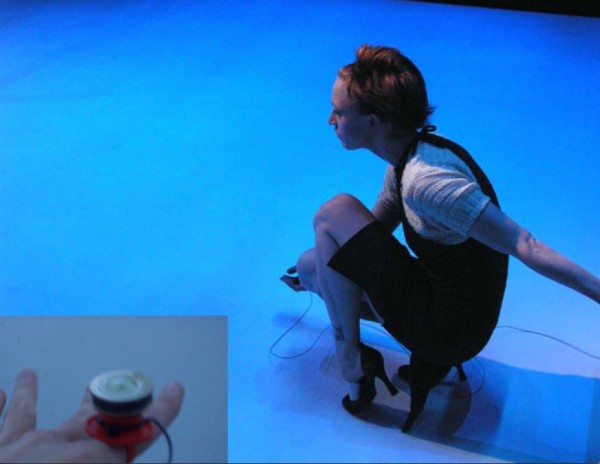 Each dancer had a microphone attached to her body. The microphones were actually small speakers that I simply rewired so that they would function as a hi impedance microphone. In this way, we were able to experiment with several different microphone-speakers. Electronic suppliers usually have almost an infinite quantity of different small speakers, most of them not more than 2$ each. 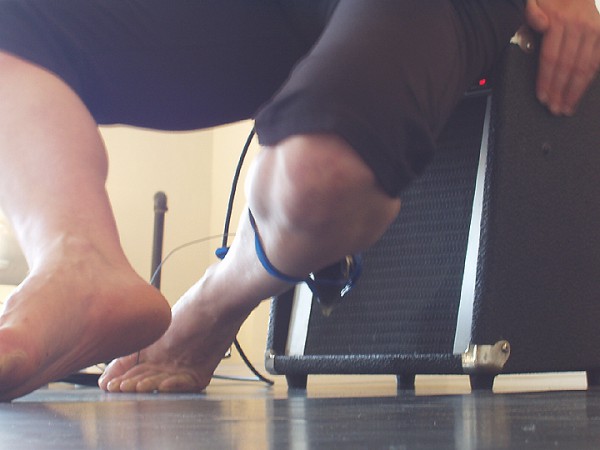 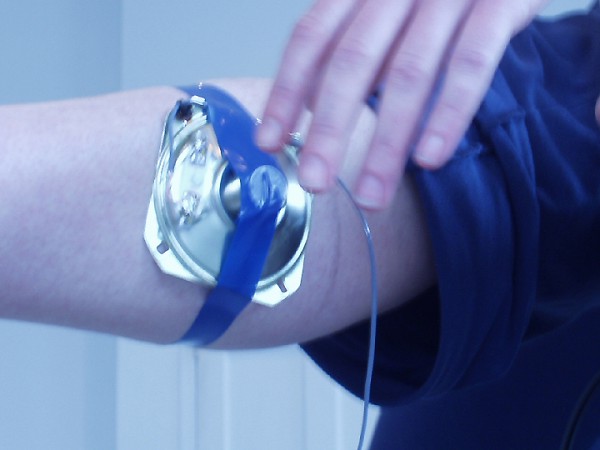 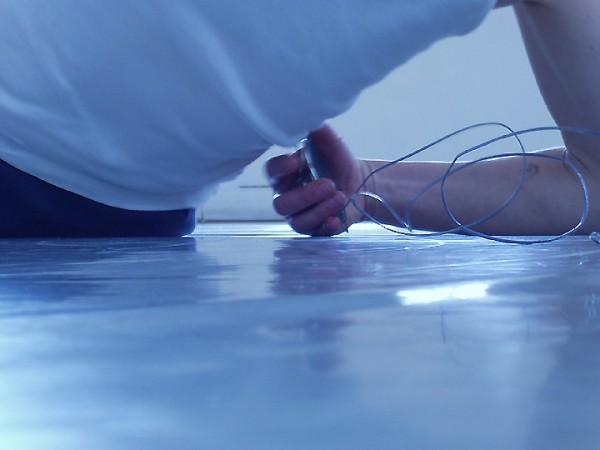 Each dancer’s instrument station was composed of a speaker-microphone, a pitch pedal, a distortion pedal and an amplifier. 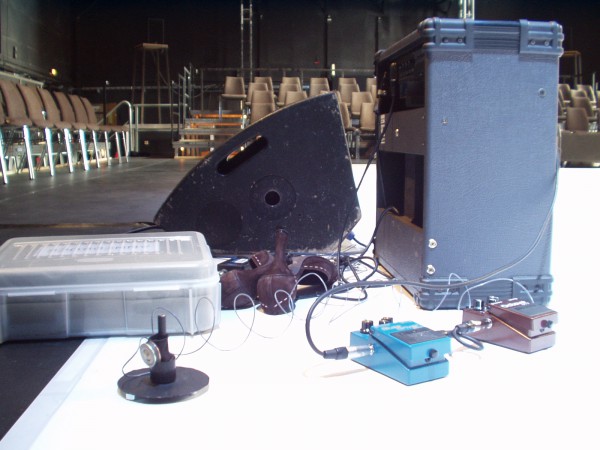 The feedback effect was created and modulated by the dancer as she moved in and out of a certain distance of the amplifier. In this way, dance and sound were very closely interrelated. A pitch pedal was used to diminish the harsh high pitched sound of feedback by lowering it 1 or 2 octaves.

These excerpts demonstrate how I used hiss from different amplifiers to create an environment.

Source recording (hiss from one of the amplifiers):

Created piece after editing and manipulation of the source recordings:

A CD entitled Duo des aigus emerged from this production. 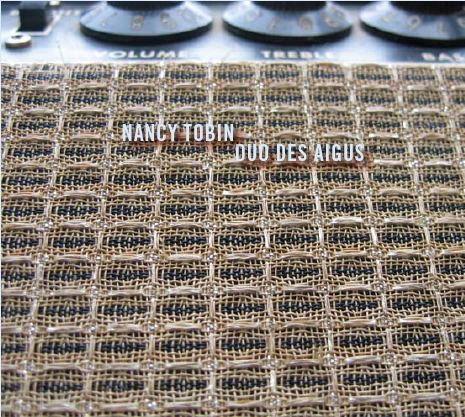