This theatre installation project was created at the Musée d’art contemporain de Montréal.

Six men and six women, all blind, go for a walk in the forest. Their guide leaves them momentarily to get some water. He never comes back. He has died silently amongst them. They wait and wait for him. It’s cold. They hear strange sounds that they cannot clearly identify. The entire play is about these 12 blind people stranded in a forest waiting for their guide to come back. Needless to say, this project was very important for me: the aural dimension of it was immense. Not only did I have to create the soundscape of the forest, but  a lot of vocal recordings and amplifications had to be elaborated. 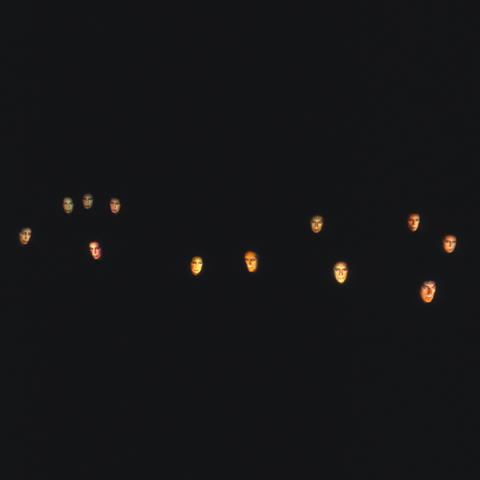 Director Denis Marleau approached this play in a very unusual manner. All the characters were projections of one female face and one male face. Céline Bonnier played the six women, and Paul Savoie the six men.

The whole play was pre-recorded and presented via projectors and audio speakers. Each character had their own projector and speaker. We worked very hard on creating the illusion of almost real, ghost-like characters. 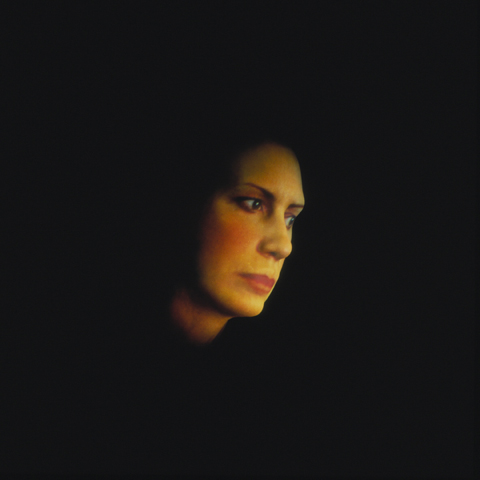 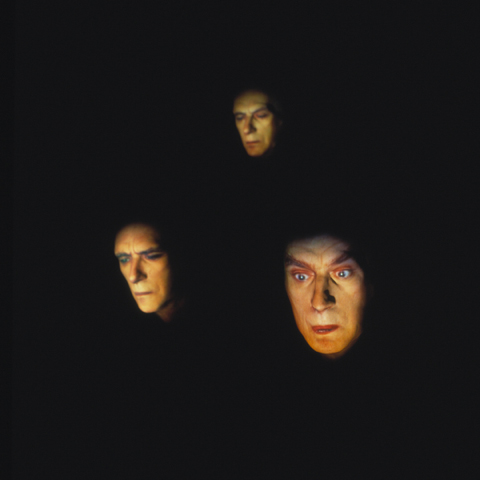 I remember trying out at least 16 different models of speakers, desperately searching for the one that would help the voices sound as natural as possible. I found it difficult to figure out how to create a forest soundscape in an inventive way. I wanted to stay away from a mere imitation of a forest in a museum, because any attempt at this would never be as compelling as the real thing. It was when researching the aforementioned sounds that I finally came upon a solution, that would help me create a unique forest specifically designed for LES AVEUGLES.

The play’s author mentions the realistic sounds of the forest as follows :

There are also the sounds the blinds hear and describe in a very poetic manner, as shown in this excerpt from the vocal tracks: 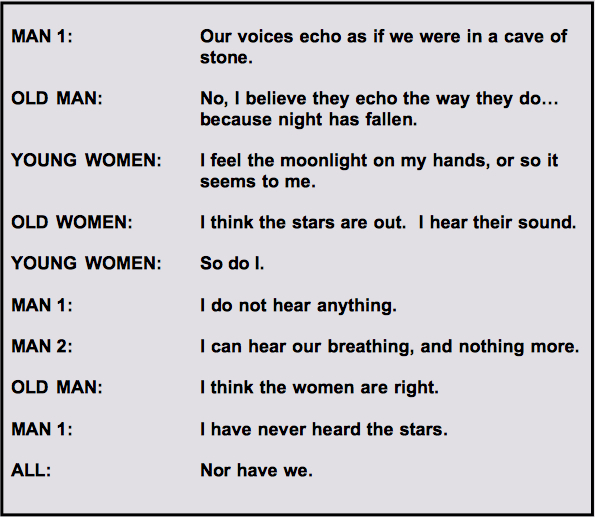 Breathing, winds, oceans, birds, steps, leaves and STARS! I had no idea how I was going to go about it. But I knew that I just did not believe in the effectiveness of simply using pre-recorded sound effects without any thought or concept. It was very important for me to find some way to integrate the sounds the author mentionned. I wanted to do this in a manner where there would be some kind of emotional content related to the action of the play. I was searching for a possible aural interpretation of the very realistic sounds of the play.

After several hours of listening to sound effect records in a library and hearing several different oceans, winds and forest environments, I had a thought. I realized that somehow all these sounds had something in common although they are quite different. They all met in the very high and very low registers. I realized that all the sounds Maeterlinck wanted included in his play could somehow come from a single instrument.

Winds, wind and leaves, the ocean, all these sounds are quite similar at the extremes of the human audio spectrum. In fact the basics differences reside more in their envelops – ADSR characteristics – than in their frequency content. Stimulated by this thought, I decided to suggest to the director Denis Marleau that every sound’s texture could be emphasized either in the low frequencies or in the high frequencies to emphasize the similarity and coherence. Not only did this approach give a certain homogeneity to all the sounds, but also helped to find ideas for the more poetic sounds like the star-breath-night sound! Speech intelligibility was maintained even when sound effects were quite loud because the  frequency spectrum of the effects were either below or above the vocal register.

Typical sounds (ocean and wind) that I listened to over and over again. This experience led me to the “forest instrument”.

And the sounds designed…

LES AVEUGLES’s  wind in the leaves sound (play backed above the audience):

Technical documents of the process:

Here is a screen grab of the Final Cut project in which the mix of all the sound effects was done.  Click on the photo to see more closely. 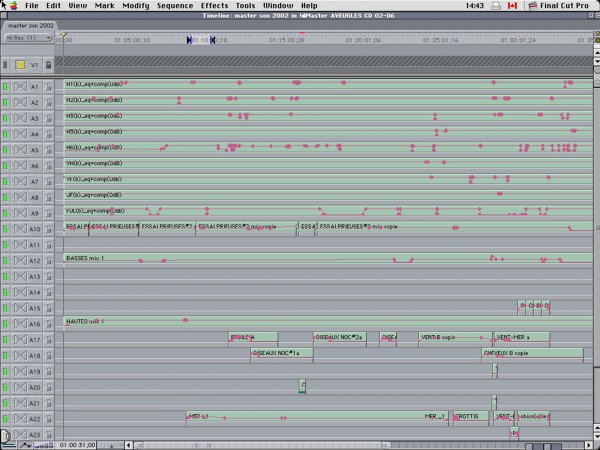 The sounds and voices were played back using DVD players.  The outputs (L-R) of each DVD player were the source of each amplification system. Click on the photo to see more closely. 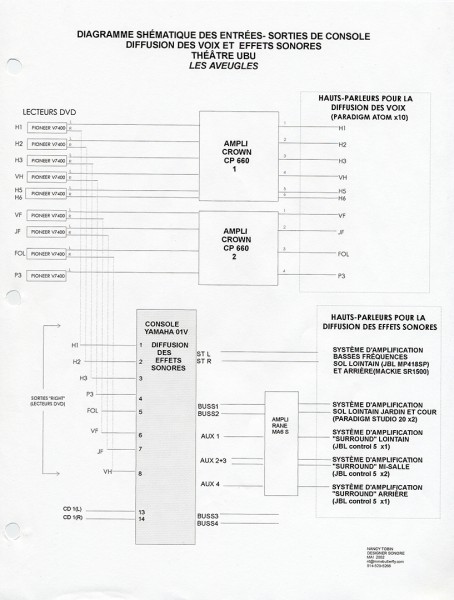 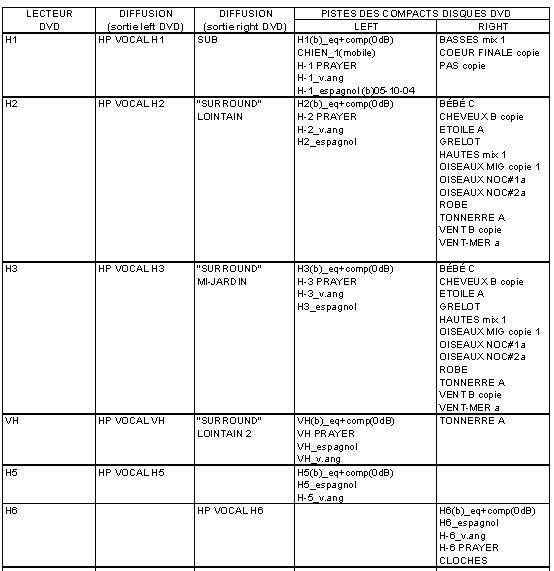 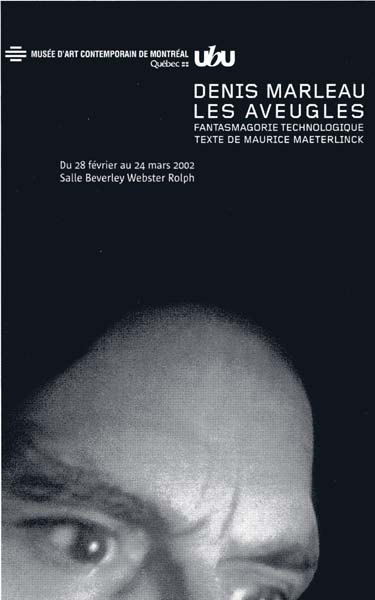